A tangent is a line drawn outside a circle that only touches the circumference at one point. The angle between a tangent and a radius drawn to that same point is a right angle.

A sector is an area of the circle drawn between two radii. It forms a slice of a circle. A sector is normally measured in degrees.

An arc is part of a circumference.

The area of a sector is bounded by two radii and an arc.

A segment is an area that is bounded by a chord and by the circumference of the circle between the points of the chord. Where a segment is exactly half a circle, it is called a semicircle. 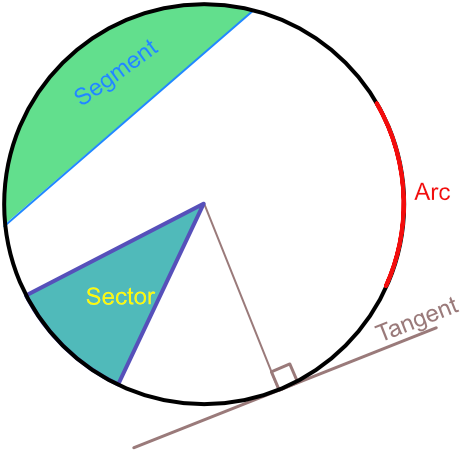 A sector has an angle of 60º. What fraction of the complete circle does the sector represent?

A tangent is drawn to a circle. How many degrees are there between the tangent to the circle, and a radius that touches that same point on the circle?

If a tangent and radius touch at the same point on the circumference of a circle, then they are at right angles to each other. A right angle is 90º.