Vectors are quantities that have both a magnitude and a direction.

Vectors are written in a number of ways. 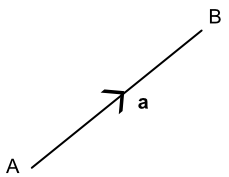 The vector may be written to indicate the start and end points: `vec(AB)`. Direction is important: the vector is going from A to B.

The vector can also be shown as a single letter: this is printed as a (bold a). When writing by hand, underline the letter: `ul(a)`.

Note that these all describe the same vector:

A vector that is equal to another vector has the same magnitude and direction, although they may not necessarily be from the same location.

Vector `vec(BA)` is a vector going from B to A. Because it is going in the opposite direction, it is the negative of the original vector.

Or using the other syntax:

The negative in front of the vector makes the `x` and `y` movements opposite.

When answering a yes/no question, always provide a valid reason.