For a time-velocity graph, the gradient gives the acceleration. If this type of graph is horizontal, then the acceleration is zero, in other words, the speed is constant.

A van is making drop-offs of goods at various locations. It starts from the depot at 9am, and drives to Warminster.

After unloading the van, it goes to Ashton where it arrives at 10.15. The driver unloads the van, has a break, then starts the return journey to the depot at 11am, arriving at 12pm.

From the graph, what is the average speed of the van, including the stop, between the depot and Ashton? 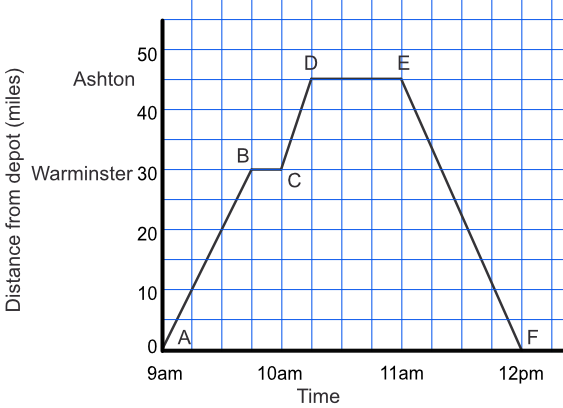 From the graph, above, how long was the van stopped at Warminster?

The vertical lines are 15 mins apart (there are 4 per hour).

The car is stopped for 1 interval.